The Mecsek [ˈmɛtʃɛk] (also Mecsek Mountains) is an approximately 45 km long mountain range in southern Hungary in Baranya County, immediately north of the city of Pécs. The mountain range runs in a width of 10 to 15 km from west-southwest to east-northeast, where some peaks reach over 600 meters in altitude. Pécs lies roughly in the middle of the southern foothills.

On some hilltops there are castles (Hungarian Vár), e.g. at Magyaregregy, at Pécsvárad and at Zengővárkony, which is named after the Zengő protruding to the south.

The southwest of Hungary is a true paradise for hikers. The Mecsek is a nature reserve and has a dense network of paths. You can reach almost everything via a hiking trail. They are well marked and lead to many interesting places across the region.

Due to its location, the fertile soil and the microclimate, the flora in the Mecsek is diverse. There are even 13 plants that can only be found here and nowhere else in the world.

Grasslands can be found in places with steep limestone slopes and thin layers of soil. You can find examples of this on the steep southern slope of Dömörkapu in the north of Pécs.

On Jakab Hill in the southern sandstone quarry, the acidic soil results in leaner and poorer vegetation. Where the soil is thicker and located on limestone cliffs, the forests become denser. The most valuable special flowering plant found here is the monkey turtle. The wild Banat peony can also be found in the Mecsek Mountains. 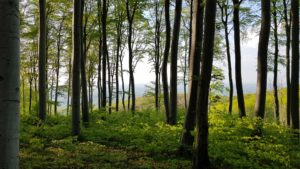 Oaks and hornbeams grow on the cooler north side of the Mecsek. Shrubs are the hawthorn and the privet. Rare plants are especially the primrose and the blue blooming liverwort.

In the cool valleys of the Mecsek you can find beeches and in the deep gorges a specific habitat with a humid microclimate has developed. There you will find oak, elm, ash and maple, various ferns and a variety of mosses.

There are around 5,000 animal species in Mecsek, including at least 700 species of butterflies and 21 protected species. The mammals that you can meet in the Mecsek Mountains are deer, wild boars, foxes, wood squirrels and dormice.

Predators in the Mecsek are badgers, weasels, martens and wild cats. The wildcats, like the owl, are nocturnal predators. The pygmy owl and the church owl can be found in many places. Otters live in some of the fish-rich lakes. 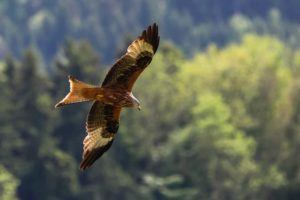 There are also 21 species of bats, such as the large horseshoe bat, the eyelash skin, and the small faded bat.

The area has a rich population of birds. Buzzards, falcons and wall pendants live in eastern Mecsek. In the woods you can find the black stork, lesser spotted eagle and black dragon. The corncrake has his home base in the Bükösdi valley. The Ortolan occurs in Hungary only near Mecseknádásd.

When hiking in the Mecsek Mountains, you will surely hear songbirds. There is a good chance that you will see the oriole, jay, glaze, blue tit, goldfinch, wren, finch, great spotted woodpecker or wagtail.

Hiking route through the Mecsek

The Mecsek-Hegység region is a hiking paradise. With currently 101 hiking tours, recreational athletes and active vacationers have a large and very varied range to choose from. A total of 97 hikes and 4 long-distance hiking trails lead through the Mecsek-Hegység region and invite you to explore. Here are some highlights of the region:

This website uses cookies to improve your experience while you navigate through the website. Out of these cookies, the cookies that are categorized as necessary are stored on your browser as they are essential for the working of basic functionalities of the website. We also use third-party cookies that help us analyze and understand how you use this website. These cookies will be stored in your browser only with your consent. You also have the option to opt-out of these cookies. But opting out of some of these cookies may have an effect on your browsing experience.
Necessary Always Enabled
Necessary cookies are absolutely essential for the website to function properly. This category only includes cookies that ensures basic functionalities and security features of the website. These cookies do not store any personal information.
Non-necessary
Any cookies that may not be particularly necessary for the website to function and is used specifically to collect user personal data via analytics, ads, other embedded contents are termed as non-necessary cookies. It is mandatory to procure user consent prior to running these cookies on your website.
SAVE & ACCEPT